Starting with the conviction that they did in fact exist, Soleil began to gain a sense of what they were. They had a signature effect in her virtual environment, speaking at her from all angles. The Princess asked if they’d encountered people of the Pan-Galactic Imperium.

Silence fell that was larger than the space they were in and longer than the time it took. When it was broken, the speakers sounded far away and down below. “Again and again, those that would see us, did.”

“But we were never important enough. If they understood us more, we were often destroyed, or driven out. Yet we exist. We want that to be clear.”

“Especially to those who deny it.”

This time the silence came from Soleil. “Is this why you found me?”

Their voices began to move position again. “No, it was you -“

“- who saw us.” Another pause marked that this was unexpected. “So we are treating you as though you exist.”

“As though you have importance.”

“And we attend you now as one who does.” It was then she recalled her memory from that dream-sending, of people (not creatures) who didn’t appear as any one thing in particular, but perhaps a number of related things, or the relation between things themselves, and as changeable as that. These weren’t glitches in the system, or Vedani kids playing a prank. This wasn’t exactly a courtly introduction, but Princess Soleil recognized the emissarial encounter. Maybe this was their policy of introductory etiquette. Maybe it was a unique situation. Maybe both.

“You may speak with us.”

“We will treat with you, and show you the nature of our characters as though -“

“- we were not at war.” The Princess knew they were on opposing sides of a conflict, though there was nothing yet between any of them. She accepted this precarious position.

“You may visit or call us; it’s a same difference. May – not so as to give permission, but as acknowledgment of possibility. To be with us is to be with us – it’s a matter of creating a way from us to you, or you to us.”

“We have our homes next door to yours.” Soleil could only think this was an error of translation, because she could sense that homes, next, and door, all meant something else. She felt sure.

“There may be a way to make a way – you must recognize when it may be there.”

“Only then would it be.”

“This way leads to us three, and that may never be true again.”

“There has to be a key, to a door, to a path. These are human things you can remember, right?”

“Anytime, she says! Well, I say anytime too.”

“Now that we’ve agreed to meet at anytime, let’s have a round of names. Beginning with the human.”

“We can bring you things you don’t know, that you’ve never seen,” they had said in more words than that. “But – you have to ask.” So the Princess thought of something to ask them before they released her streamview from the program loop – a genuine curiosity, simple and inconsequential. Soleil told them about the book she never found in the Great Library at home, from her memory’s sparse detail, with the word ‘movements’ in the title. The three individuals had accepted her request as reasonable.

Now, Soleil was again at a streamviewer, the common equipment that also allowed for human connectivity to the Vedani network interface. Not just a few, but many things made for Vedani suited Alisandrian human capabilities as well.

With her new skills and the ingrained technological acumen imparted by her mother in their lessons together, Soleil could create harmless program structures to her suiting. She’d created an inviting shell for housing unusual occurrences without disturbing other virtual furniture. She noticed residual environmental effects from her previous encounter with the Kao-Sidhe, as they suggested she call them.

Neither of them were waiting for the other. They intended to collide, at which moment the Gazebo would open. A place to meet with a nice view, designed a little like a trap to spring up around them on mutual recognition of their next encounter. It was amenable to them both, with a stability that would allow Soleil to keep her grounding, and enough flexibilities to allow the Kao-Sidhe a comfortable presence. Their embodiment had been characterized by phenomena to Soleil; this time they made an effort to visually appear.

They presented relatable expressions that wouldn’t stress-load the system. A jumble of humanoid and other puzzling features represented each, to the degree of a quick knife-and-woodblock carving. Each was nevertheless iconically distinguishable, and the encounter felt a little more real.

“We’ve brought you a page,” they began without introduction. The Gazebo was an attractive visual setting, with conglomerate views of favorite gardens around the Pan-Galaxy.

“We believe it’s exactly what you are looking for.” Soleil faced from one icon-being to another. One resembled a bright vegetable and was mostly silent. The second had a lot of detail embellishment and flourished with excesses of color. The other stood forth with presentation and drew a lot of interest. Garlic, Rosy Glow, and Dragon Food didn’t bother naming themselves again, but Princess Soleil could assign their distinct attributes.

They displayed a painstakingly crafted page. A graininess indicated that it was an artistic virtual replica of something physical. It looked to be from the right age of her life, and the title included the word ‘movements’. But the page was covered in dance diagrams. Soleil really didn’t think that was the book she’d chosen as a youngster, but it was interesting – at least, difficult-looking and similar to a familiar martial art.

She accepted the page graciously from Dragon Food. The stream transfer took unusually long, and for some reason their virtual sprites were winking the entire time.

This Vedani transport was familiar enough in form that Soleil could stand on it correctly by guessing. There was room to swing her arms around on the handle-grip platform encased by its interactive field. The gloves they gave her to control this machine were wearable without modification. They explained that she would lack certain degrees of interface, but that she had enough inherent skin conductivity to enable control. They showed her how to make settings for human accommodations.

It moved, and then she was adrift with others in space. Soleil thought she knew all about space, before. Now she was standing in it, fielded, with the rest standing nearby. The stars rotated around them as they changed their individual footings with a sense of coordination and comedy. It felt like something she’d wanted for a long time, but that she didn’t know existed.

Stretching, then a big step to launch into the movement. Heading partly upside down, involving limbs with the floor, from one movement to another – rotating in a controlled tumble, she enjoyed the rhythm her body defined.

A bright beam burst into the room from a small plane of light. The woman noticed it as she danced. Guessing a correct reaction, she passed her hands through the beam as she continued. Three sparks emerged, expanding to glowing wire frames which floated to their own positions. She let her momentum spin to a stop.

One spoke. “Is it exactly what you were looking for?”

“I’m unsure as to its importance,” the Princess replied, “but I am enjoying what you brought me. In that sense, perhaps yes.” The wireframes nodded. “I do wonder where you found it.” The wireframes shook their heads. “For some reason, I haven’t asked anyone to learn this with me. Do the Vedani dance?”

The Kao-Sidhe paused in motion. “Not exactly. Not like you’re thinking. It’s not for the sake of a good time.”

“Unless they’re having a good time doing it.”

“If you see it, something terrible may be occurring.”

“The answer is no…” Dragon Food smothered his chuckles. “…but yes? They’re very good at it.”

“If they teach you, you should try it.” 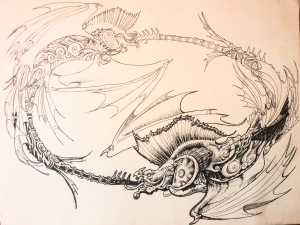