“In order to surface anywhere else, we need to take extra readings and change a number of vectors. Even then, I’m not sure our location will differ enough to avoid notice.” Arjun hesitated a moment. “Can you ask Arctyri to help us?”

Coiled Arkuda lifted er head then dangled it askance. “Your brother also knows Arctyri. He’d be a better person to initiate the request, and I can assist.”

“Are you doing this on behalf of the Imperium?”

“I’m currently acting independently.” Arkuda locked eyes with Arjun. “I was willing to come here because you’re someone I know who doesn’t let the government behind certain doors. I left in the good grace of one authority who is now gone. Demands could possibly be made of me, and I may not be able to comply. Also, congratulations on your new invention; it’s beautiful, and I knew it would work the moment I became aware of what you were doing.”

Arjun called his brother to the office. Buckminster Woollibee arrived quickly, and once fully apprised began brainstorming aloud. “We can try cycling a cold current through the air system – an actual cold current, not just cooling the place. We’ll need an appropriate oscillation… maybe an entire vat of liquid nitrogen. Arjun, can we find an intern who will ladle it into twenty transport receptacles?” This was a running joke regarding their research isolation, where there was no comfort of interns for expediency.

“Actually, let’s ask some research leads to help. Some of the ones we need to talk to about this next, anyhow.” They got Arys Steinman, The Hoopoe, and Danila Bautiste, all linked to priority operations. In addition to being the stodgy quantum physicist, Bautiste was a volunteer bartender at the parties, so they had the elite pouring skills. They distributed one large round in small ladlefuls, then went about setting them open at specific points that the brothers had worked out. Arjun left to set certain cycles into the system, but first he indicated a location beneath a venting point to Bux. The researchers agreed to remain for the sake of possible assistance.

Bux invited Arkuda to place emself there next to him. Still glowing softly, Arkuda crawled and slid er head into place, leaving the rest of er coils where they lay against the wall. Bux Woollibee readied himself to sit comfortably and explained what they’d be trying. “I’m going to hum a set of tones that I discovered and repeated throughout some meditations after I first met Arctyri, which brought clarity to some insights. I’ll try cycling them for a while. I’d like for you to harmonize with me using dragon frequencies. Your signature will be clear but secondary to mine, as befits the matter.”

“I’ll do my best to remain subtle.”

Flipping through a binder at her desk, Maryan didn’t at first notice the unusual frequency modulation tickling her eardums, but it registered when the cold whisper of a breeze brushed her leg. Finding it strange, she looked around for a moment but chalked it up to one of the many environmental oddities to living in the Arch. Someone may have opened a door somewhere causing systemic air movement; average motors can create persistent overtones that travel farther than their basic noises.

Architectural engineer Arjun Woollibee returned to the small party in his office to find that it had grown. “Oh! Aha!” Against the wall opposite to Arkuda, and in matching coiled form, another dragon radiated a coolness that swirled through the room. The presence of two courteously-sized dragons made the human office feel cramped. Diplomatic forms would be even more helpful, though still wouldn’t entirely erase the effect. They seemed more elemental when long. Arjun made an awkward gesture of respect.

“Will you allow me to explain the situation here to Arctyri in our own language?” Assent passed around the room. Arkuda’s daylight pulsed more vividly while an incredibly condensed audial impression tinkled and rumbled like a fleeting hallucination. “I’ve concluded. Give er a moment.”

Pondering, Arctyri gazed up, then down; closed er eyes, and retreated even further. The air went almost still before another swift shivery blast as ‘e opened er eyes. “I can help you. Carry you to safety at the surface, and then back to your base. But I’m not sure how long I can keep doing it.” Arjun stepped forward and bowed, as the primary person who would collaborate on details.

Arys, the ever-humble knot theoretician, rang a finger against the nearly empty liquid nitrogen tank, partially reminding everyone that it needed to go back to the cooler. “I believe I know who can help distract the threat – someone who is within our confidentiality and is partially-but-not-too familiar with situational details. It would possibly be of great benefit, if I may be allowed to use emergency priority outcall.”

“Yes,” replied Arjun with barely a hesitation, “use this authorization at the communications center.” From a top desk drawer, he handed Steinman a chip key on a lanyard. “Report to us only if it will make a difference.”

“We’re not going to lose our readings, will we?” asked the Hoopoe, glancing between all present while hiding a sudden minor panic. “I’d really prefer to keep up live monitoring.”

“Though your surface coordinates will be changing, I expect to return you to your usual base, where your operating conditions should remain consistent.” The Hoopoe mastered a little swoon over his first time being directly addressed by a dragon, and nodded his thanks. Steinman fled wordlessly to make his call.

Taking a moment here to appreciate the layer of my process that is the typewriter draft. Bones of Starlight second draft occurs via typewriter, and it’s just worked well that way the entire time. Rhythm, immediacy, physicality, sound, focus, energy investment, all are contributing factors. So here’s some upcoming prose in its raw typewriter incarnation. I do fewer on-page edits than when I began.

Long-coiled and footed, a dragon glowing of sunlight was heaped against one wall of Arjun Woollibee’s control office. Manageably sized but not in true diplomatic form, ‘e was clearly injured where one side throbbed with darkness. Arkuda’s eyes were clear and fixed upon the engineer as ‘e spoke. “Your enemies have found you. They are here to attack you.” That sank in, and Arjun looked up through the cieling and several pressures of water. “There’s an unfriendly-looking reception awaiting you at the surface. Keep your new system activated, and I’ll bring you a live image.”

A flicker of appreciation for a visiting friend showed on Arjun’s face, as he acknowledged the serious situation with complete attention. The image flickered hazily into the room, beaming out from a sunstrip corner. A cluster of attack hovers were focused around some familiar-looking but nondescript open ocean, their usual surfacing point. “They look like mercenaries. I would like to think they’re Pliskin’s,” assessed Woollibee in reference to their umbrella company Plexus’ founding inventor, “but they don’t look defensively equipped, and we’ve had no notice. Did they see you?”

“They did not, I was a mere shimmer upon the water. Do you know who would want to attack you?” asked the dragon with a pained breath.

“I know who I would think of first. Given their timing, I’m almost sure,” nodded Woollibee. “Some of our research partners have disappeared, with involvement of people linked to Foundational groups. They believe humanity should stick to its foundations, and very often that means they oppose learning and discovery. They are a group only of humans… who apparently now have our surfacing coordinates.”

Within the aetherscape behind Uixtr Xkcd’s closed eyes, during a moment of stillness he was able to secure while traversing this unfamiliar distance, he accessed a personal message node which possessed certain formal criteria. It was the Vedani habit closest to encryption. Unique filtering of the aetherscape was a personal trait similar to physical appearance. The message needed to be formulated specifically to Uixtr, not multi- or widecast; it needed to be single-author, not anonymous or conglomerate, and of a minimum familiarity of association in public quanta; of linear fashion, not fragment-pieced, and of information density significant to Uixtr’s set threshold. Someone needed to know to send this specific kind of message in order for it to land in Uixtr’s node, which would reject any other form.

This time, there was one. Uixtr dissociated from his environment as he examined communication that linked him to his people while he was alone from them. It was from Oibhn Clnr. The message emerged from an interrelation of referential indicators, a meta-layer of information that described the context of the missive, while indicating how the foreground communication arises with a connector diagram fed by live related data. With Vedani communication, ‘linear’ did not refer to spatial arrangement of symbols, but that one item preceded another in following or prioritized logic. From its contextual constellation, this linear message stretched, waved, and morphed from one item to the next.

OIBHN: We’re done using up the rolls of grey foam. Only one tuning polygon remains in Imperium space. At first the scavengers were the usual private-interest suspects, then a new one to note, appearing solo. Then came various investigators, then investigators accompanied by military escorts, who remained posted. They may or may not have noted the distribution throughout every federet and nearly ever galaxy. Probably not all of the placement data belongs to the same sources. They seem unaware that we’ve achieved full coverage, or if they know, then they still haven’t figured out the office machines. To their credit, they might. We now have wide pluralities of transanchor coordinates, having developed additional capacity and new capabilities. Our system administrators have sharpened their skills and are ready with the upper hand. They’re not going to know what’s hitting them, but we’ll spell it out. Our signal will be impossible to ignore.

Taking a moment to pause and admire some of the personages who have come into to contact with the journey of this trilogy. 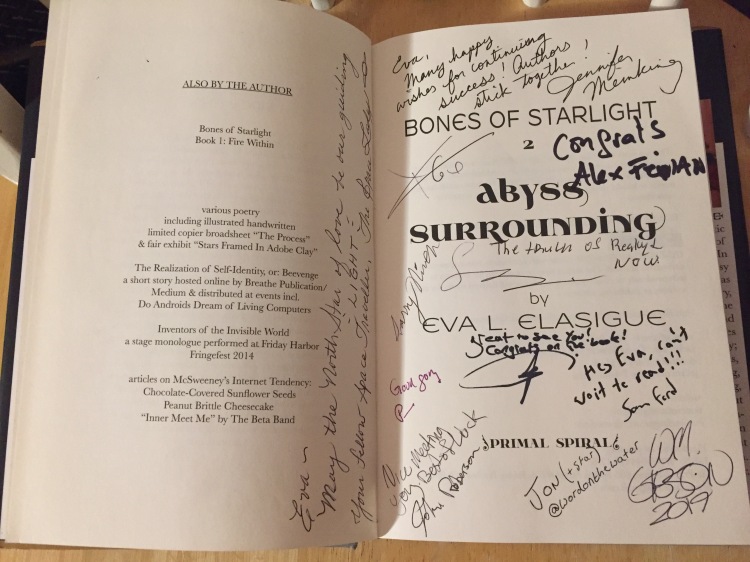 There’s a William Gibson, a Charlie Cox, a Shakespeare & Co. storekeeper, a Larry Niven, a comic book store owner from my youth, MORE, and most recently the Space Lady!