The 2nd Sequence audiobook of Bones of Starlight Book 1: Fire Within is now airing beta on evaelasigue.bandcamp.com  featuring the music of Phutureprimitive – available to listen, pay what you want to download.

A note on rights accessibility: this set of audiobook recordings is being released with a Creative Commons Attribution license. That means they are available to be shared and remixed, including commercially, so long as correct credit is given for the sample. So, these sci-fi book readings can be openly incorporated into music and other audio and video collages. I am keenly interested in any such collaborations and would very much like to be informed, even rewarded! But, permission is not necessary to proceed. Please, do. 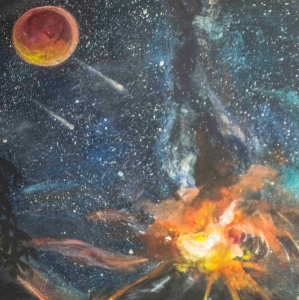 This past weekend I met with two excellent fellows in entertainment who each received copies of Bones of Starlight 1 – actor Tom Hiddleston, and director Kevin Smith! A genuine pleasure. With Tom, I’m wearing my author photo jacket (my ‘trail blazer’). I came to see Kevin in my borrowed Locus Awards hawaiian shirt, which is also where the flower lei came from. In the space where he’s holding his arm out, that’s where you can imagine YOURSELF in the picture. 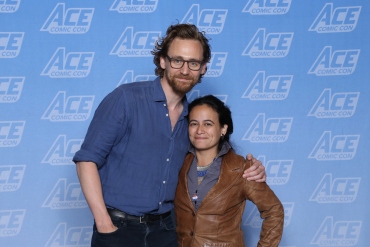 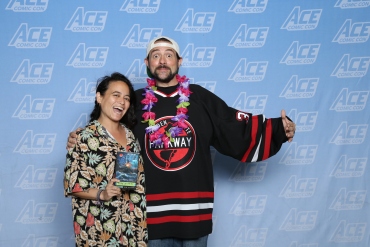 The Locus Awards was a splendid and jolly affair, and was also the occasion of the 50th anniversary of Locus Magazine, a stalwart of science fiction & fantasy critical review. 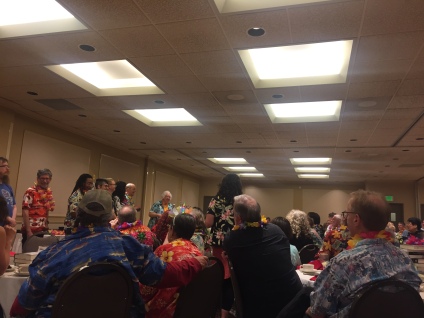 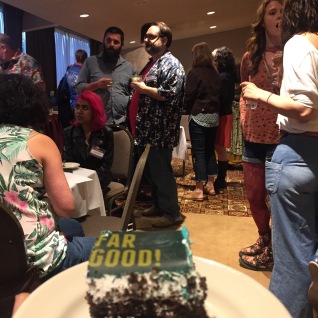 Out and about in Seattle, I discovered an artwork location of Bones of Starlight cover artist Leo Shallat, and came out (again, as poly-pan-sexual) to celebrate with the Pride Parade.

“I see my objective through access views,” said the smartly dressed gentleman piloting the speedcraft, to his long-haired one-armed passenger. He was focusing on a peripheral photostrip display to one side of the frontwards view.

Sitting very still, Raev Sturlusson smirked and raised an eyebrow. “Your objective is ahead of us?” He looked up at the ceiling, and seemingly through it, for a moment of consideration. His brown skin had gained a shade of health. “Permission to capture with me onboard,” he declared, “Phi Protocol.”

Verne ‘Bobcat’ Trosper understood this indicated the golden opportunity escalating spiral for chase-capture-kill, each action attributed to a dependently sequential growing activation energy. “Permission wholeheartedly taken.” He wiggled himself further into the pilot’s seat. “I might bend disclosure rules.” They would have better chances if he used onboard ally technology in this uncontrolled area. “The last ship within observation range will pass us soon, going in the other direction. It’s an undercover, so I intend to take notice as we cross.”

“Your discretion is impeccable to the utmost. I might not even notice, smooth operator that you are.”

“It’s possible that no one of consequence will.” Trosper began turning dials, and unusual harmonics filled the sonic spaces between words. “As to who might, woe betide thee.”

This stash-dump of overstock toilets quietly occupied half a small valley of construction site ruins. Toledo Vadr addressed them. “There’s something bodily about a toilet that makes it seem like a personal extension. Each of those could be up against someone’s ass, and excretion passes through it like another organ, which it resembles. This looks like a very large assembly of individual organs.”

“We’re taking as many as we can carry.” Random Arriba turned to scrutinize the cargo trailer that their little-but-mighty tech ship would tow to a location they hadn’t yet received. “I wonder if these are for the aliens we just met.”

“Aliens?” Toledo asked. That was an archaic word that had fallen out of favor. Other sentient people hadn’t been commonly called aliens since longer than fifteen generations ago, but that was also the last time that the Imperium had met and integrated another sentient, the Aquarii.

“You know… sentients we don’t know yet. We’ve only just met, and wisdom is a deep lesson to demonstrate. Okay, they’re obviously people, who look astoundingly similar to us Humans. And they were actually as easy to work with as anybody who doesn’t say a word to you.” They had a tread-sled, which went with them from loading point to loading point. It wasn’t the fastest work, but they made a difference as time passed.

“Do you think they use toilets?” Toledo wondered aloud.

Random half-smirked. “If they did, they wouldn’t need to lift some from us, would they? They could get their own.”

“I really hope we’re not furnishing our own prison cells.” Toledo continued peppering this conversation through the gradual filling of the cargo load.

“And… what if we are?” Random selected the next toilet she hoisted with a little more care.

“Then, maybe we’d have to do something about it. For now, second life ain’t too bad. Besides – apparently they’d have enough courtesy to provide toilets. Even though this is a lot of toilets to people like us, I think we’re only taking about as much capacity as a middle school or a medium hotel. Prisons are either smaller or bigger.”

Random snickered. “Maybe they’ve just now discovered our amazing technology, and it’s the new art fashion sensation. Just to have one. Could be. They’re like push-to-operate fountains.” The link module Arriba was carrying brought up a transmission. “We’ve got our location,” she announced. “It’s totally different, and also nowhere near anything.”

Sticking with incredibly talented Seattle-based calligraphy painter Leo Shallat, a stunning trio of paintings has been selected for the hardcover editions of Bones of Starlight. Even more, there are already prints available of the original artwork! Get them while you can, links with images. Very honored to be graced by this world-class public-works artist.

Displaying as the new website banner is a detail shot of the artwork for Fire Within. The also-beautiful previous selection for Book 1, “Dragon”, is still viewable in the Paintings section of Leo’s online portfolio.

for Book 1: Fire Within
“Golden Compass”

for Book 3: Greater Beyond
“Radiate”