The private investigator was only five games into the poker table at Joe’s pub when he was handed a call from ‘Mr. G’. That was the first time he’d seen the dishes kid, who brought the phone out to Joe. Joe interrupted the deal at the table. “It’s a Mr. G, for you,” he said with a look that didn’t really want to know.

He stroked the grey felt on the card table as he listened. Derringer guessed that one of the other players was an eye for Mr. G, who this time turned out to be General Draig Claymore through a subtle scrambler. Derringer could recognize his thoughtful pause pattern through the bent vowels and inflections. Mr. G had an assignment for Derringer that he could do by himself, and was within his usual range of errands. He was essentially being asked to take an official vehicle out for a joyride to nearby hinterspace.

“I’d like to you to go to this coordinate; there shouldn’t be anything there, and nothing in particular should show on your shipboard. But according to reports, there might be something. If you register something, or anything, I’d like to you tell me. Go now.”

How did they know him so well? Besides being the government. Many’s the time he resisted taking one of their ships for a spin. This was like his reward for being a good boy, in that respect. The point he sought wasn’t that far away – Dalmeera-on-Florin was in nearest vicinity – yet it was sufficiently remote, in a strange direction. Derringer cranked it up and let it out, impressed by the standard specs on a government vehicle.

This zone was nice and clear, and Derringer took a soaring route, to widen his coverage, yes. Sometimes what you’re looking for is on the way to where you think you’ll find it – worth the fuel.

He neared the coordinate after about an hour, and switched from soaring to stalking: creeping paths alternating with observant pauses.

Weird… what is that? Something tiny, dancing in place right where there’s supposed to be nothing. Like a confused fly.

There were pockets of restful pause in the beat of the Princess’ ongoing search for home space. Though fleeting, she pretended that they weren’t, and they would last until they were over. Along the way, she’d successfully maintained contact with the invisible window-cluster anomalies, and for that, she was very glad.

It was possible that she was getting tired. Someone might panic at this point, which reminded her that she mustn’t. Transforming the panic resulted in thoughts both morbid and comforting. So what if she did get lost and die this way? Utilizing the consideration of an historian. The possibility was nearing; if disappointing, it was also simple. Her learning with the Vedani would come to no benefit. Hanging onto the levity of academic curiosity, she theorized about unknown true history, thanking her teacher Arkuda for the fortitude in this reactionary decision. She was still moving, still achieving one always-surprising jump after another.

Soleil thought on the old advice about staying in one place in order to be found. After the first jump, she knew she’d done something her Vedani team had not, and maybe could not. There was no waiting for rescue.

Until July 31: Paypal $5 per bookmark sticker to primal.spiral@gmail.com with quantity & address in note to receive anywhere in the world.  Limit 25.

Talk about a beautiful misprint!  While I was under the impression that I would be receiving vinyl transfers and not inside-window stickers, they do make lovely glassine bookmarks.

While I visit Nine Worlds in London & Worldcon 75 in Helsinki, these will be given to anyone who can show me they ordered a copy of Book 1, Fire On All Sides! 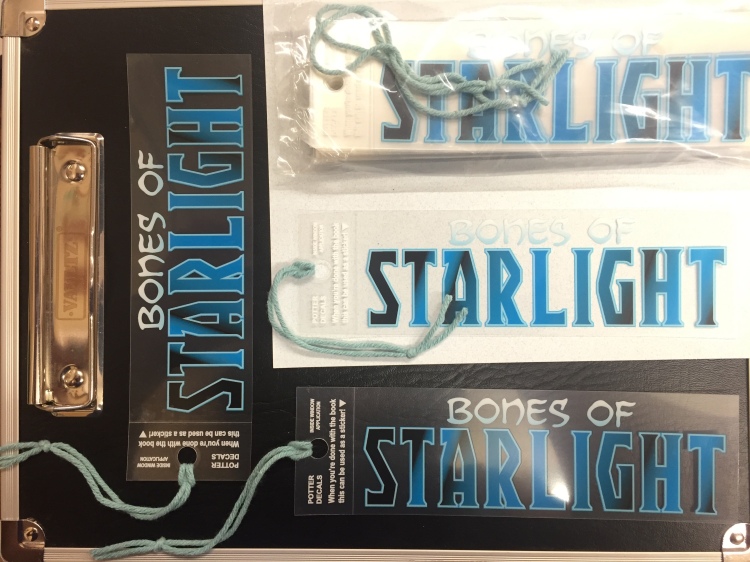 Friday & Saturday were both beautiful days to do the things we love to do best, and that included writing and group creativity!  From river to art installation to stage, live art, and teahouse – we connected in different ways with writing and perspective. We had such an engaging group of people.

I also mic-delivered the entirety of The Lay of Sakhana & Zoe from Book 1 during Saturday’s open mic at the Dream Zone (2).  I’ve read parts of this at speculative poetry panels at Arisia (Boston) and Norwescon (Seattle).  Will share official photos when they come…

Below, Adam One (13th Sequence centerpiece artist) in front of his live painting, with our friends.

Here is a workshop artwork I made, featuring the tree people of Cascadia:

And while I was away from my studio, it was shortly inhabited with experimenting graffiti art by George Myers (below).

This weekend come practice creativity with words and story, with me, in the lovely multi-arts setting of Cascadia Festival!