I made this coin purse at TitanCon/Eurocon 2019 with the guidance of Emma Andrews of Northern Ireland, a set decorator for the HBO television series Game of Thrones. It was lovely chatting with her, and she was also kind enough to sign my copy of Abyss Surrounding: 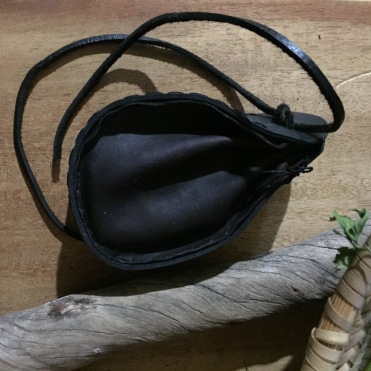 Hi! I’m going into the woods for a moment. The story serial can begin again on the 3rd of September. For the next two postings, I’ll share related points of interest.

I have here a little tile (from Ireland by Celtic Valley Ceramics) featuring a triskele pattern in the style of Newgrange, a monument tomb in Ireland which pre-dates the pyramids. This was the basis for the design of this year’s Hugo Award base – I’m holding the award won by Uncanny Magazine for Semi-Pro Fanzine, accepted by Michi Trota & Elsa Sjunneson-Henry: 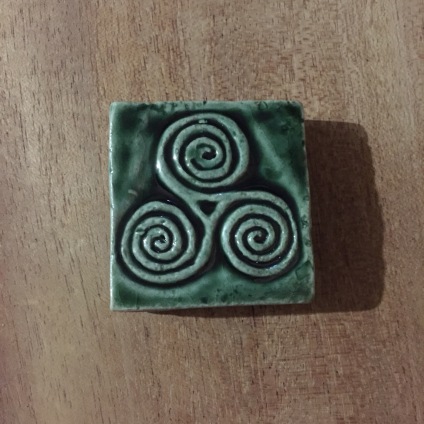 I’m here in Belfast for the first time ever – along with the combination of the European Science Fiction Society convention (EuroCon) and the Game of Thrones fan convention known as TitanCon, run by the Brotherhood Without Banners.

I joined in to read from Bones of Starlight on the Literary Night mic. Despite appearances, I clearly remember looking up from the page many times:

The flag on the podium is from the ESFS, hearkening to the days when they would cross the Iron Curtain to celebrate stories and imagination. Photo credit: my seat nexty, Her Majesty Pat Cadigan (that is what it reads on her nametag), one half of this EuroCon’s Toastmutant. Refer to the fanciful cyberpunk Alita Battle Angel for one of her recent story adaptations, which I greatly enjoyed! 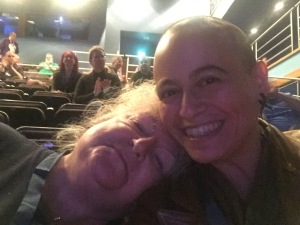 As a volunteer, I also took hundreds of pictures for people with everyone’s own cameras for the George R. R. Martin signing, which gave me the chance for another next-to:

I’m aligning my salmon tattoos here – George & I discussed the Salmon of Knowledge eaten by the legend Finn McCool and memorialized with a monument here in Belfast. He surmised that he must have eaten the Cheese Flip of Imagination, which I suspected I may also have crunched upon. My dress is approximating the interplanetary telekinetic known as The Rowan, written by Anne McCaffrey, in gauzes with amplifier crown.

I took a trip between conventions to visit something I wrote about first, then discovered was real when I checked: a thousand-year-old bar (pub), est. 900 CE, known as Sean’s in the town of Athlone, in the heart of Ireland. This is a section of the wattle-and-daub wall uncovered during a renovation in the 1970’s:

Mine, casually mentioned in Bones of Starlight 2: Abyss Surrounding, was titled the Show Horse. That means this pub was established at the start of the life of the oldest Sitka Spruce, which stands near the site of the Rainforest Writer’s Retreat on the Olympic Peninsula (WA-US), which I also visited this year! Co-generationals, classmates.

I happened to have a single American dollar to add to Sean’s collection of signed currency! For now it rests on the bar top rail next to the staff door.

This was sooner than Draig had expected to encounter home turf conflict, though of course, it could happen during any General’s tenure. This was in fact happening under every General in current office, because there was not one federet without multiple occurrences of signal takeover shutdowns.

There weren’t yet any physical injuries, save for mild societal self-inflictions. Economies were certainly suffering. Immediate response was naturally to protect citizens as in a hostile situation, even if the scales hadn’t tipped.

They were going to have to do something very soon. Test attacks. They had to. This couldn’t be an indefinitely inactive situation – this was the incontrovertible opinion of King Proxem Vario, and General Claymore as his lead advisor was unable to naysay it. Draig wondered if anyone called him Grant anymore, now that his partner Charlotte the Queen Ascendant had died in battle without him. Though his children were Magus, his family was honored by way of his title name. That was what everyone called him. Those who disagreed with his ruling decisions did away with his title and just called him Vario. Like Sturlusson. Not so malicious, but grumblers spoke of heavy-handedness, and he fell under a growing shadow of suspicion. King Proxem Vario showed no sign of letting it bother him.

From his desk, Draig gazed at his mother’s photography of famous Capital buildings while he ran down his mental list of action preparedness demands. A lot had been assembled on the shortest of notice. They had triangulators; reflectors; shields; disruptors; amplifiers; sonics; projectiles; fire of many kinds; and steel. They also had steel.

Dublin WorldCon is off to an exhilarating start. I love how many different people translate in from their distributed communities to create this family that morphs from year to year and place to place, growing and staying in touch.

Our venue, the Convention Centre Dublin 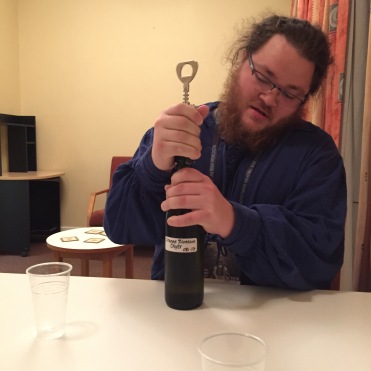 Sana Takeda describing her process with a Marvel cover