Bright Wave sat curled at the base of the tree growing from the platform over the valley below. With half-closed eyes, she moved a line of color across the sunset. Slowly, and with care – previous ambitious attempts at expression had made her faint.

Her reverie was interrupted by the big grey pietrobird, scattering rocks as it landed. She rose from her seat, and went to look the bird eye to eye where it stood. It hopped backward, pealing loudly, and dropped below the ledge before its eyes popped over again. Someone may be down in the mountain. She sent the bird a flash of color, which it spread its wings to absorb.

Bright Wave moved down the rock face. Halfway down, outside the cave, hovered a vehicle. With a tentacle she parted the vine curtain to see a mantled Fleeting Shade.

They stepped toward each other, tendrils lifting. They met partway, super and subsonic vibrations popping in the air. The leaves on the vines shook lightly.

Lead Composer Fleeting Shade gestured, and a stage floor shimmered in to surround them. Figures in red and white danced around the edges. The star image above reflected the sky in two weeks’ time.

Bright Wave cast her tentacles aside and whipped one around in a circle, marring the picture with scratches. She would have dispelled it entirely, but it remained. Her supersonics morphed to echo the burning Symbias, which made him flinch. She reached out to him again, and the dead silence of the groves fell around them. She sagged, her head hanging.

Fleeting Shade held her up, and the edges of the stage surrounded the silence. The figures in red and white appeared, drawing themselves into the dead space around them. They had eyes, and ears.

She straightened and looked up. Before her she created a candlepoint of light, which grew to the size of her head, then faded. She tried again to make it brighter, but couldn’t, tendrils shaking in frustration. He drew her in to hold her. The stage and people remained. 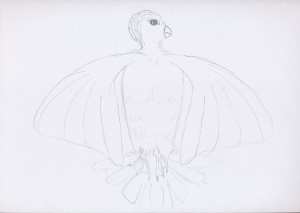 From her perspective in darkness, the occasional sound reached her ears. Chrysanthe was thinking of her pillow and blanket forts – the way everything became dark and hot, smelling of her own breath, and she listened to her father in the house. She couldn’t hear much more, so she stayed in that cozy place.

Her dad hadn’t said anything since she’d last slept, but he was nearby. When she reached for him, he played with her hand a little. The occasional squeeze was enough to reassure her, since she didn’t know if he couldn’t speak, or she just couldn’t hear him.

People approached, talking. Just the rise and fall of their voices, through many layers. She jiggled his hand and he wiggled back.

“We’ve sent so many nurses to other planets. Thank you for volunteering.”

“This seemed an appropriate time to step back in. Yet, I’ve never done triage. What am I looking for?”

“This is our first sweep. We’re reaction testing. This device measures muscular nerve response and blood flow to extremities. There’s a threshold.” She showed the readout to the volunteer. “During high rush, patients below that will have lowest priority as instructed. I’ll show you.” She gestured to the man holding his daughter’s hand. “He’s awake, we’ll start with him.” She cradled his other hand in hers and he flexed it. He did the same for Chrysanthe on the other side. The voices were louder going wah wahh wahhh.

The nurse put the holding device in his hand and wrapped his fingers around it, squeezing them. She released and cradled it for a moment until the device light turned color. She checked it, and glanced at the other patients around the room before showing it to the volunteer aide. “This is a significant reading, below threshold by a margin. Input the command here, and his bracelet will carry the tag. And that’s it.”

The aide nodded. “I’ll watch while you check the next patient over here.” 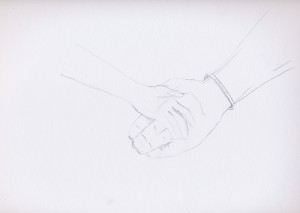 “Due to energy pattern expansion rates, we need to widen flight paths beyond the C sphere, here.” With her laser pen she colored the zone orange.

“Except for you people,” Arcta indicated the technical instrument pilots, “because you’re carrying the Dyson probes and photon sounders. You’re in two teams, each covering a hemisphere. There is a set rotation plan, in case communication equipment is affected. We already have some signal bandwidth workarounds.”

“Now for those of you shadow marking – priority observations are signal strength, signal length, placement, and finally type.”

“Don’t you think the subject of what we see might be more important than the quantified signatures?”

Arcta looked down and let half a smile emerge. “Those of you who’ve examined the list of signal types have found, I’m sure, that the list keeps growing longer and is already too long to memorize. Type recognition is last priority because attempting it would keep attention from every other reading. The data is being pored over at Loramer. If they find a useful pattern in it, then we might shift our focus there. Until then, let’s concern ourselves with the possible effects and direction of the energy output, and how to handle and defend ourselves from it.”

“And we’ll detach one team – that’s you – to array themselves between here and Photuris. You’ll have a more sensitive set of instruments. We want you to sit there, and read. I’m sorry we can’t just deploy satellites for this – we want people there live reading, and able to respond.”

“That’s all you need to hear from me. Your officers will give you the nitty gritty.” She watched the pilots exit, saluting the General as they passed. Hydraia cleared her data display.

“That would leave holes in our coverage. We’ve already thinned out in order to create a buffer zone.”

“I think the greater hole in our knowledge would be to ignore this information. We can spare that much, so that’s what we’ll do.”

“Do you realize that the energy dynamic in that sphere is over twenty times that of any known anomaly? And we still have no reason, or insight other than confusion. Diverting resources from safety on something practically pointless is reckless. I hope you understand that.”

“That’s what we’ll do until or unless we can bring out another Alpha base.”

At this point Hydraia nodded, turning around to put things in her bag. “I’m heading to Alpha 1, and back in three days.” On her way out she stopped to salute. “General.”

She crossed the corridors of the Alpha base to where the Drift 9 was docked. Arcta entered straight to the cockpit where Wendel Harper lounged in the captain’s chair. She chucked her stuff into a bin and flopped down next to her, heaving a sigh. “Fools. They really have no idea.”

Wendel straightened and began powering the ship. “That kind of day today?” 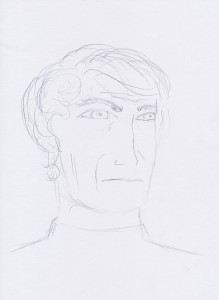 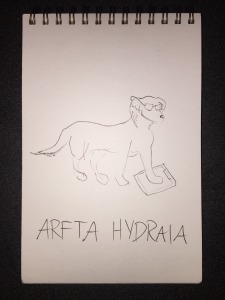 “I’m being transferred to Ionos. They’ll put me on show shortly. There’s nothing you wouldn’t already know.”

“Your sham trial is not a concern. We can feel them meddling with the relay amplifier. Are you ensuring they are properly misdirected?”

“Someone’s making sure they’re properly misdirecting themselves. They wouldn’t recognize the technology for some time anyhow, given their own devices. The Imperium may have picked up some Vedani trash, but the cutting edge, combined with your additions, is outside their scope. The best researchers on the subject are currently occupied with other things. Is the power accrual going smoothly?”

“Certainly. Nothing is interfering with the core, which will soon be drained.”

“Which is… devastating. I hear the survival rate has been very good.”

“We’ve given them plenty of time where we could. But forces operate as they must.” 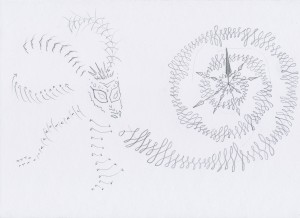 Mireille loaded her bowl with greens as Margeaux took her seat.

“My pleasure. Where is Queen Celeste?” she asked, looking around.

“The Queen pardoned herself for other matters,” replied Vario. Mireille rotated the greens to Margeaux’s place and dipped into the capers and onions.

Charlotte smiled, and asked “Have you spoken with Soleil in the last couple days?”

“Yeah!” Margeaux flashed a grin and laughed. “What a relief it is. I expected her to sound croaky, but it’s her very same voice, only a little quiet.” Charlotte nodded.

Mireille sampled her melange. “She hasn’t been eating with us,” she shrugged, “so.”

“Oh, I know. It makes sense she’s withdrawn, considering. It’s strange as to when Soleil started speaking again, isn’t it.” Margeaux sipped on her drink. “At least that’s all there was to it, and he’s off to get what he deserves.”

Charlotte pressed her lips shut and looked at her husband. “It was a surprise, yes,” said Vario. “One that I was glad to see. I was only expecting she would learn from the encounter as necessary, but her speech at that moment was revelatory.”

“Can’t argue with that,” said Mireille. She tipped a ramekin of honeygrub dressing over her bowl and cracked pepper over it. Everyone continued to help themselves.

“It had been a while since we two caught a sunset together.” Margeaux smiled as she nibbled.

“Here’s to many more,” toasted Charlotte, raising her glass. Vario returned the gesture, and the girls followed suit. 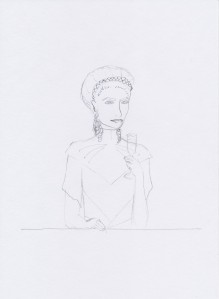