“We have to wait. They’re running emergency traffic signals, limiting in and out-bound. There’s a newscast about it.” Wendel Harper reached up to tune in the overhead speakers. The boy sitting copilot and the passenger hushed up to listen.

“The Pyrean Midsummer Vision was interrupted today by Raev Sturlusson, who descended from the skies on the capital during the final moments of the intergalactic solstice celebration. The capsule he descended in was emitting an agent bearing HA235, the disease that decimated the planet Hirylien twenty-five years ago. Many attendees are already experiencing symptoms. The Verdant Plateau of Alisandre Capital is under quarantine, and vision attendants are being held there and at Eldea Hospital.” As this narrated, they silently turned to meet each other’s eyes.

Hydraia rose from the fold-down seat to stand behind the pilot’s chairs. “We’re waiting to be let in to the main transport arena, correct?”

Harper nodded. “That’s right. They’ve paged us with a wait time of a couple hours, but there’s no telling how long we’ll be in line.” She pointed to a timer on the air traffic display.

The passenger pulled a piece of paper from her pocket. “Here. Establish a link with this frequency.” Harper checked it and nodded.

After a short moment, someone answered. “Spear Traffic Control, how can I assist you?” At mention of the capital’s towering military building, the captain faced her passenger in mute surprise.

“Acknowledged Dr. Hydraia, do you have a clearance code?”

“Thank you, Doctor. Drift 9, new traffic directions have been sent. You may proceed.” 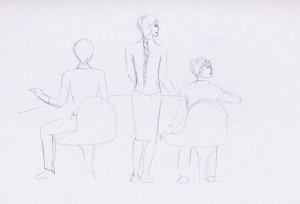 King Ascendant Grant Vario raised the mask to his face and activated it. The hairs on his arm lifted as the ion barrier activated around him, effecting a blue glow. He nodded to the Dragon Councillor, and they exited the transport onto the grounds of Eldea Hospital, accompanied by a security escort.

The quarantine guards opened the door for them. Inside, the halls were filled with people reacting to their symptoms, rubbing their faces and blinking. Back when the sickness appeared on the planet Hirylien, there had been no knowledgeable measures. By the time they recognized the epidemic, the majority of the planet had been infected. The symptoms had been difficult to distinguish until they were too serious for recovery. This time, they’d recognized it almost immediately.

From the room she shared with her father and two other patients, Chrysanthe watched the hallway. The retinue walked past, and she saw the second dragon she’d ever seen in her life. Arkuda’s scaly form gleamed next to the King Ascendant’s grave face, and they passed in a quick moment before she could mention it. She wasn’t sure if her sight had already gotten fuzzy, like they told her it would, or if they were really glowing. She turned her head and succumbed to drowsiness, closing her eyes on the sight of her sleeping father.

They met with the head of the hospital, who debriefed them on the patient population. Those furthest along were beginning to lose their eyesight to nerve degeneration. Vario took this in, but refrained comment.

They passed through layers of security till Arkuda and the King Ascendant were outside Sturlusson’s room. The guard coded them in.

Inside, the quarantine prisoner sat shirtless in the bedside chair. Hospital equipment had all been moved to the corner. At the sight of visitors, he rose to his feet. “I am honored. The King Ascendant, and his dragon.” Arkuda gazed at him in silence.

Vario faced him squarely, hands behind his back. “You declined treatment, even though you tested positive for HA235.”

“So is this, then, your farewell note to the Imperium?”

Framed by his dark hair, a smile crossed his face. “No.” He locked gaze on the King Ascendant as he sat down again.

Arkuda eyed Raev Sturlusson sidelong. Over the man’s collection of tattoos, he glimpsed disruption patterns. Residue of communication with others. The dragon studied him intently.

Vario clasped his hands tightly. “We have reports now of cases on Ionos and Lurin. How many more outbreaks are we to expect?”

“How many more do you need in order to put an end to them?” Arkuda watched his surrounding disruption evaporate.

The King Ascendant drew himself up. “We are now enacting the same quarantines that we did on your home planet. You were lucky to have survived.”

“I really was.” The communicative traces reappeared as Sturlusson joined together different faces of his fingers. He looked at them through half-closed eyes. Arkuda stirred the air toward the prisoner with his breath, observing the patterns react.

King Ascendant Vario made a prompt and wordless exit. Sturlusson angled his hand sign to the dragon Councillor, who curled his lip before exiting in turn.

The airlot manager stood with Arcta Hydraia and Wendel Harper by the Drift 9, surrounded by military and council vehicles. The wind was high, and they raised their voices to speak over it.

“Ms. Harper. I’m required to use private transport during my consult here at the Spear. I’ll be traveling between here and the Libran Federet. Are you available exclusively for the short term?”

Wendel tilted her head and nodded. She’d been half expecting the offer. Setting herself on an appointed route might be a good way to let trouble blow over. She jerked her elbow toward the ship. “What about the boy?”

The airlot manager considered. “We may be able to offer him clearance.”

“I’ll be here for the night,” said Hydraia. “I’ll get in touch with you soon, if you want to talk it over with him.” The captain shook hands with Hydraia, waving as she re-entered the ship.

She set herself back down in her chair. From where he remained in his seat, Toller looked past the airlot shadows toward the Royal Court. “Dr. Hydraia is hiring me up for a shuttle route. You can stay with me so long as you’ll be handy.”

Toller lifted a hand at the view. “We’re at the capital now.”

Wendel smiled, remembering he’d never seen this before. “Yeah. Old Alisandre.” Her gaze traveled up the dark octagonal obelisk to the sky.

Toller tapped his teeth together in consideration.

“Tell you what,” said Wendel, powering her ship. “We’ll decide over dinner.”

In a waiting chamber in a middle floor of the Spear, the dragon Councillor and his protege sat kneeling against one wall. She searched the patterned tapestry facing them. The dragon opened his eyes.

“The man you’re going to see – I observed points of contact on him. Communication disturbance, perhaps. I recognized patterns there, and I feel troubled about it. So be aware, in every way.” She breathed deeply, returning his look. He nodded and rose to exit the room.

The Princess rested alone until the door opened once more, and her father stepped inside. “If you’re ready, Soleil.” She stood and straightened herself, inclining her chin before joining him.

They walked down the hallway past two corner turns. The walls of the octagonal tower turned gently around them, regularly giving way to heavy framed windows.

“You’ve been made aware of the state of things at the Verdant Plateau and in the quarantine areas, and of the other new outbreaks. You’ve heard what he’s done over the last twenty years, so you have some idea of who we’re encountering.

“We’re fortunate in not having contracted the affliction. Though tests show that Sturlusson has HA235, he’s not developing symptoms. We’re not taking chances, so,” he passed her a barrier field mask, “here you are. Observe him well, Soleil. He’ll soon be on trial.” They donned their masks outside the guarded door, engaging the minute blue glow before they went in.

The prisoner sat on the floor, his back against a wall bench. At their entry, he rose to this feet. Soleil walked in behind her father. The man before her was not as he looked in projections. The air around him roiled with energy, and she stayed on guard.

The King Ascendant gestured to the wall benches, and they all sat; the Princess and her father on one side, Sturlusson on the other. “Ionos,” began Vario. “We found your agent there, one Teryj Lakos. From Hirylien, like you. He’s told us enough to find the rest. But we know there’s more. Where?”

A grin spread across Raev Sturlusson’s face. For a moment, the Princess’ vision grew dark, and her temples felt warm.

“Waiting, aren’t they.” Her voice sounded thunderous hearing it for the first time since she woke. Sturlusson raised his eyebrows. King Ascendant Vario turned to regard her.