An audio newscast played quietly in the dim room. Mireille reclined in a chair next to the bed where her older sister lay still. Facedown on her lap was an open history textbook on the Phiroen Era of Magus expansion, when a group of imperial fleet officers staged a military revolt. The orb embedded at the top of the curved ceiling pulsed its light in theta rhythms.

A knock on the door. Mireille rose, setting the book down. She opened the door a few inches, then all the way, letting the visitor in. “General Claymore. Draig.”

He stepped forward, his eyes on Soleil beneath the covers. He turned his head to nod back. “Princessa Mireille. How’s she doing?”

They kept their voices quiet, both watching the bed. “Her vitals are fine, but we still can’t wake her.”

“I don’t know what happened there. She looked tired, but that was all. She collapsed mid-sentence. I think she was conscious for a few moments more before she passed out entirely.” His brow furrowed. “This hasn’t ever happened before, right?”

Mireille shook her head. “No. No, she’s never just fallen like that. These ceremonies hardly phase her, I can’t explain it. I just hope she wakes up soon.”

After a moment, Draig cleared his throat. “Do you want someone to relieve you here?”

She smiled. “No, thank you. I’m catching up on my history, anyhow.” She gestured to the facedown book. “Get some rest. We may need your help later.”

Every visual detail is made of living fire. Twenty-four people stand, arrayed as though in ceremonial reception. Waves of heat blur their faces. Most are female, some male. All connected with ties like the bones of starlight.

She sees them from every angle, through the vantage of an invisible surrounding mob. Eyes seething with condemnation, demanding testimony.

A face comes into focus. Though she barely recognizes it, it is one of her ancestors. The likeness bears little resemblance to the historical paintings or projections. It looks wrong. As she looks on the rest, so they return her gaze. She feels herself drawing strength from a belonging that always fostered her, while the surrounding forces swell into a roar held barely at bay.

Everything she knows about her family begins to illustrate itself in fiery lines around their forms. Flourishes of their proudest accomplishments multiply into a great mass. She draws herself into it, a comforting blanket to shield her from those other eyes.

A knot of serious-faced people held conversation near the doorway, where an obsidian and hematite mosaic spiraled out from a corner. Those rocks were the ubiquitous rubble by-product of the construction of Anzi and its suburbs. Fragrant herbs grew from the cracks amid the feet of those conversing.

A stone’s throw away, he looked up from his task of grinding powder apples to watch them. The sun shone through a quickly moving layer of overcast. He poured a heap of powder, seeds, and skins through a strainer, sifting the powder into the bowl below. He winnowed the strainer so the light, dry skins lay on top, brushing those off into a bag for tea. The seeds went into a jar, which would find its place in the shed where other full seed jars lay dormant.

He looked up in time to see the messenger lift his hand in farewell before hurrying out, probably heading to as many places as he could hit. The four or five who talked with him dispersed slowly, faces thoughtful. Cheli, in her rag-stitched skirt, met his eye and smiled, heading over.

“Thanks for doing that, Toller.” She took a pinch of powder apple from the bowl and brought it to her tongue. She smacked her lips with appreciation. “Good for cereal, sauce, pudding, baking and it never goes bad.” Cheli took another dip into the bowl.

He followed suit, taking a taste of his work. The graininess sweetened and melted, with hints of dry spice. He could hear voices murmuring around the valley. “What was that about? At the door.”

Cheli crossed her arms and sighed, affecting nonchalance. “The Zendris Fault is moving. The one that runs right by this city.” He blinked. Toller wasn’t really surprised that the planetwide catastrophes had reached him. Places he once knew had been demolished by earthquake or buried in eruption, news he’d already been accepting. “No official announcements, but people are getting ready. Evacuation within the week, probably. Who knows when these things really happen. Could be tomorrow.”

“Could be.” He smiled at Cheli. If nature claimed the city before he left this garden, he could think of worse places to be buried.

“Mmm hmm.” Cheli bent to pick up the bowl of powder apple. “Want to make some pudding?” 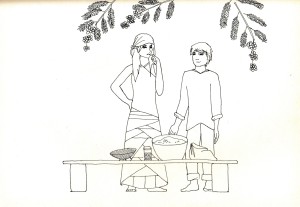 As though the four of them were at lunch around the table, the Princess’ mother, sister, and cousin sat around her bed. They discussed recent alliance changes in the Council, trade shifts, and diplomatic appointments. Queen Ascendant Charlotte seemed unwilling to touch on the subject of her daughter’s comatose condition; the most she could do was include Soleil in state affairs as she normally did. She sat upright in spotless white and gold robes, looking much as she did at the head of Council.

In contrast, Mireille sat upright in pajamas, her hair undone, though she looked pleased to be talking with her mother. Her last visit had been four days ago already, the night Soleil had fallen ill. The Queen Ascendant had been required on emergency matters in the Expansion 6 Federet. She brought them news, and more than that, the presence of her monumental stiff upper lip.

Margeaux had brought a favorite dress obi of Soleil’s; it was draped across the bed so she would see it when she woke. Soleil’s long black hair lay neatly plaited down her chest.

“… About fifteen percent of the refugees are choosing to relocate to underpopulated worlds in the Archipelago Federet. There are plenty of agricultural and industrial opportunities there.” Charlotte pursed her lips. “While the rest remain in orbit for now.”

“What about Zerite production?” Mireille looked to her mother. “Genesee is still our sole source, correct?”

“Correct. Production has halted completely. The Aquarii sendsingers will have to make do with the Zerite that’s already in the market. There’s plenty there. But the fact of a finite quantity will raise the price of Inter-Fed travel.” Charlotte patted and stroked Soleil’s limp hand. “Zerite isn’t strictly necessary to enable the TransNet, but without it the sendsingers would be taxed to their limits. It’s a good thing we don’t need much, and it’s one of the longest-lasting on the phronium spectrum.” As soon as he finished her sentence, a patterned knock sounded at the door.

“It’s time for me to go.” The Queen Ascendant rose, and the two younger ladies stood with her. She smoothed a hand over Soleil’s forehead before leaning in to give it a kiss. “My strong daughter.” She gave warm farewells to the other two girls before making her exit.

Mireille crossed her arms over her chest and looked over at Margeaux, who seemed a bit overwhelmed. Her lips twisted into a wry smile. “Mother’s milk, Cousin. Mother’s milk.”

Margeaux gave her head a shake as if to clear it. She curtseyed to her cousin. “I must be going as well, Mireille. May the light of the Pan-Galactic suns shine on you both.” 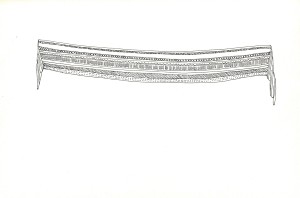 From within the comfort of the known, her gaze is drawn outward by the insistent presence of the surrounding watchers.

Strange stars shine through the pervasive medium of fire. She knows the charts, and this multitude of skies is wholly unfamiliar. Unknown populations push forth just beyond comprehension.

An individual coalesces in the forefront. Not visible, just the feel of someone human – a mental handshake reminiscent of moondust, engine grit, and distance. Cold but firm. It stretches wide into a smile, indicating much to be told.

The touch leads her to someone nearby. An introduction of sorts. This one is a swell of magma, a wave of heat assuming form. This is the communicator, the conduit. The fire in her mind. It gives her a glimpse of those it represents, possibly draconid. She’s never met a dragon in this aspect, the trilling, echoing vibration of its spiraling form.

The trill unfolds, volume expanding to include many strange and emotional voices. They reach, expressing eagerness, a desire to be known. Beneath that, suppressed anger driving the reason for contact, a clamoring for amends to be made. For what?

Back to the grinning soul, placing her again amongst her dynasty. They all look outward. They know why they’re here. 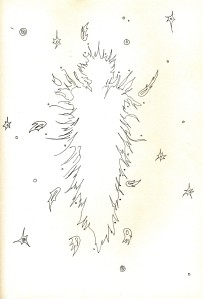