The place sat amidst other medium buildings its size, an ordinary metal-and-glass affair that reflected the last glow of afternoon. The address was its only sign, though there were traces of past businesses. The first floor windows were blacked out. Derringer tossed a ring of keys from hand to hand. “Well, this looks promising.”

Fred DeWalt leaned toward the detective. “Do you think it’s a trap?”

“Only insofar as working for a woman like that is a trap. No, this is for you to use. Just like the hover.” He turned halfway to look at the gleaming, new-model stock racing flier behind them.

“Stars afire, Derringer,” said Chad, adjusting his glasses, “when he drove this up I thought it must be the boss’ car. And then she hands us the keys. To a Griffen.”

The detective showed a wide grin through his mustache. “Tools to your advantage. You found yourselves a good game here, don’t be afraid to play it. Savor this moment. You’re aces!”

“What about you, D?” asked Chad as they walked to the door.

“…I’m aces too, yeah.” He almost started laughing. “Trust me. But this is your gig.” He fit the key into the door, which unlocked smoothly. He looked up at the side of the building. “What do you think this place was? Newspaper?”

“Old insurance company.” The other two men looked at Fred, who’d spoken. He shrugged, they shrugged, and they all went in, leaving no sign of themselves but the shining white Sibley Griffen out front. 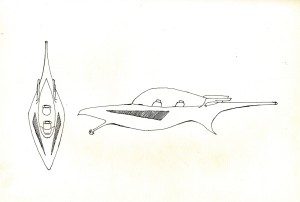 Residential ramparts ran along both sides of the aqueduct waterway, sunlight still touching their uppermost stories. The water ran slowly between two high fences, contained in its hardstone channel.

A boy sat on a bench at the base of the channel wall. He’d seen people on his way here, but now the area was empty. A beetle droned past, which meant that someone might have fruit trees on the rooftops. He scanned around for public access stairways, but couldn’t see any on this side. That didn’t rule out the possibility.

He gazed at the upper rooftops, taking in the last of the light. A sunstrip gleamed bronze, transporting the sunlight into subterranean depths. He withdrew half a sandwich from his schoolboy’s pack. It was gone in short order and he stretched, shouldering his bag again. He felt almost full.

Looking up and down the channel, he turned away from the sunset toward an alley leading out from the aqueduct. Before he could find a stair to the rooftop, or someone who knew where one was, there came a causeway leading into the bedrock. Down it he went.

The temperature dropped, hardstone giving way to natural hewn stone walls. There were more people in the belowstreets here, where the sunstrips spread their illumination through branching networks around doorways and windows. More and more people were ending their workdays, crossing between levels above and below.

He scanned the crowd as he walked, noticing a couple boys leaning against the wall of an alcove. They were older, both wearing dark jumpsuits covered in pockets. The moment he met the eyes of the one at the corner, they grinned wolfishly.

“Where you going in such a hurry?” said the boy who’d met his eye. Tattoos peeked out from both sides of his collar.

“Nowhere,” said the boy, getting out the main walkway. A few Aquarii passed behind him, mantislike legs clicking against the stone, head-tendrils waving.

“So, take a load off.” They sized him up, from his bag where he set it on the ground, to his clothes which were none too fresh. They were just playing, and he played back. The three of them narrated stories about passersby until a girl stopped in to visit.

She had an Aquari projection orb. They sat on the ground and passed it around. She was adept with it, intricate and luminous colorscapes rising from the orb in her hands. A few stopped to watch. She held it out to the boy in a scene of turquoise and silver filigree. When his fingers touched it, a series of orange polygons bounced and tumbled through, colliding with each other and exploding in puffs. They broke into laughter.

“Do you all want to come to the Valley?” she said playfully. The two in jumpsuits smiled, and seeing them, the boy nodded as well. She rose, brushing dust off her rag-stitched skirt and placing the orb in a belt pouch. Without another word, they followed her lead.

After following for miles of alleys and innumerable corners, ladders, and staircases, he found himself tagging along, ready to locate his whereabouts should he need to. This might have troubled him, but he decided the only way they might actually get there was if he stopped worrying about it. He was having a good time along the way.

The four of them occasionally emerged onto the surface, popping up in different neighborhoods. He lost count of the new faces he’d met at the houses and porches where they stopped to talk. Their smiles grew wide. Finally, they went through a door that looked like any other door, and he realized they’d arrived.

In a mudroom decorated with lights and branches they took off their shoes, adding them to the small mountain of footwear. Stepping in from there, he felt his soles touch soil and grass. Astonished, he looked up straight into the night sky. This was a courtyard, an orchard brimming with gardens, all lit by lamps and lights hanging from the trees. Heads turned to see them enter, and the four of them raised their hands in greeting.

KI: So is it what you needed to move forward?

AS: This will give us at least four new streams of information in our reconnaissance soundings that should tell us where and how to modulate our power workings. It’s priceless, Karma. Good work.

KI: Don’t thank me. I was just the gopher. I’m sure the author would be proud, if he weren’t dead.

Karma Ilacqua sat in sunglasses before the Iljen Monument, a stylish cap covering her red bob. The morning rush was dying down. Above her level gaze, they had already replaced the windows on her last room at the Massey-Sonnes Hotel. She read the discussion on the inside of her dark lenses.

AS: If the Foundational fanatics hadn’t set the hit on him, he might be here doing this with us. He would have been. If only.

KI: Well your team, whoever they are. I’m betting they’ve got what it takes.

KI: Then it’s a good thing no one knows who you are, where you are, or what you’re up to. How are you holding up in the middle of secret nowhere?

AS: Getting hardly any sleep, living the dream. Only I ran out of my favorite gin.

KI: Shame on them. Do I need to send you a care package through those company messengers?

AS: You should, and also I want cookies. I gotta go.

Closing her fists, Karma turned off the impulse readings of her glasses’ biosys. Reaching up, she took them off and rubbed her eyes. Idly, she scanned the rotating planet of information that was the Monument. The visual representation of Genesee, close by on her right, was pulsing red over half its surface. Shielded areas in color patterns of specific agencies indicated emergency relief. A paltry few of the planet’s tradelines still showed activity to the dozens of other entities.

She considered pulling up the infopoints on her hand held when a muted clash of cymbals issued out of it. A message from her boss at Plexus. She pursed her lips to one side and put her sunglasses back on, pulling it into view.

-Saris to Ilacqua
-Please report to the Mainstation in 5th Alisandrian orbit. You are to coordinate distraction teams aimed at Fortuity and Seven Suns. Compile dossiers.

Karma threw her head back in seeming exasperation, but she wore a close-lipped smile that lingered as she tucked her shades into a coat pocket. She stood and stretched, looking around as a flytaxi came to rest directly in front of her. Nearby pedestrians looked to see who it was. The door opened, and Ilacqua stepped inside.

A searing, endless brilliance stretches in every direction. The pain of it is unavoidable, like pupils bare to the sun.

Once every eternity, it pulses. Magnesium-magma veins seep in for brief moments, giving way once more to inchoate light.

With each pulse, the bonfire rivers crackle and grow. The formations change, a message reaching through the empty channel. An unknown mental signature.

An emotion forms, the feeling of a child toward fire after having felt its burn. The pulsing gains wild velocity, a sense of familiarity growing ever nearer. The heat of a gaze on one’s back; ancient thoughts in living whispers, flickering. Getting warmer.

Then like a skull split, a ribcage opening, the scene unfolds and begins to make sense. Faces like her own, and the damning eyes of others all around. 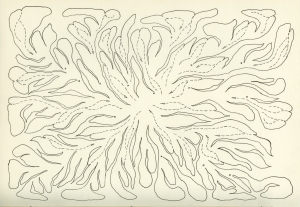