“Then they got me involved, and I kind of told them that you exist. So they’re probably coming at you with a job offer. I hope I haven’t done anything too terrible and that you’ll forgive me. Maybe this will be fun.”

Derringer bit his lip and shook his head as he followed his guide, who had not once looked at him since he arrived. He laid one considering footstep after the other. From his years of experience, he was wary of official jobs – if you couldn’t fill the bill, they had a way of taking it out of you. But this seemed like a good way to get swept up, and besides he might be getting overfond of that lady. Must be mutual, if she put the big dogs on his tail. So here he was, walking straight into the Spear.

As the guard stopped in front of the office door, Derringer checked if there was anything he needed to remember before walking in. The door opened, and he went in remembering nothing. 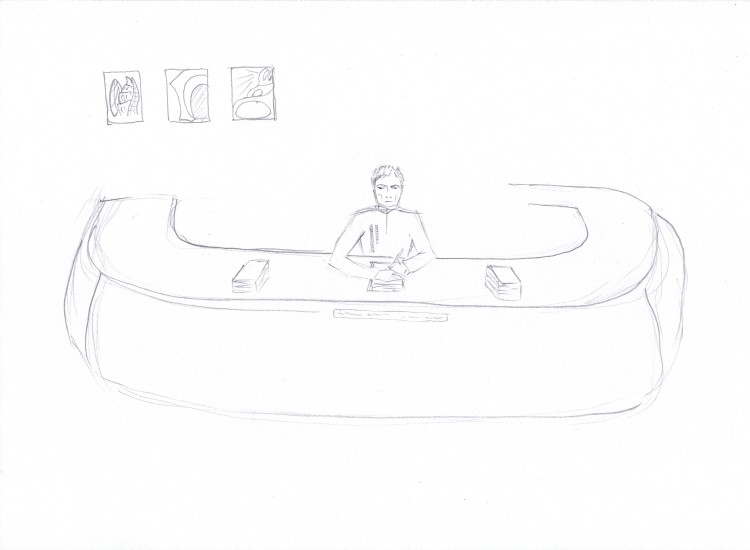 He faced a desk with a placard that read General Alisandre, Draig Claymore. The man behind it had a stack of papers on either side, signing them as they moved from one end to the other. “Welcome,” he said, “and thank you for never having been here.”

“It’s an honor.” He took the other seat at the General’s gesture.

“I value your credentials, and those who gave them to me.” General Alisandre signed another paper carefully. “It’s my duty to explore every possible avenue in my search, and I hope you can help me. Do you have any idea what I’m asking you to find?”

“An important person may be missing.”

The General nodded. “Official channels are already engaged, and we have scant days before it becomes a matter of public knowledge. Can you work under that kind of scrutiny?”

“Sure, especially if that’s not really what I’m doing.”

“No, of course not. Your actual employment would of course be your own business. And you would have all means at your disposal to accomplish it.”

“Means are helpful, so long as they’re not under supervision.”

“Why would they be? You’re not connected to anyone in this building.”

“You will remain completely independent. We simply wish for the goal to be accomplished.”

“I think I can set myself to business as usual with a goal in mind.”

“Remember, we have no idea what it is you’re supposed to be doing.”

The General signed one more paper, and put away his pen. “I’m having beef and beer for lunch. Perhaps you’d like to join me on the terrace?”

“Oh yes, it’s lovely. And there’s more than one.” They stood, and exited to an empty hallway.