For the past week, I’ve been carrying my typewriter around because I didn’t want to separate myself from my end-of-novel process. I took it with me to Two-Hour Transport in Seattle, and the next day I used it at Denny Park during a convivial lunch hour. On my way back to transit home, I was in the middle of the western crosswalk at 9th & Denny looking towards Westlake when I took a most unusual fall, an open shoe eyelet getting caught in laces. I couldn’t unstick my foot in time, and the momentum of the typewriter took me down in an ungraceful sprawl. I landed on my knuckles (looks like I punched X-Man Colossus, formerly of the Brotherhood of Evil Mutants, with a left hook), my knee (internally okay, just bruised, like I kneed Colossus), and the point of my chin (a dime-sized bruise, as though Colossus, a.k.a. Pyotr Nikolaivitch, barely got one little shot in) – and the typewriter flipped over and took a knock on its upper noggin, the outer front corner of its case.

To the everlasting credit of the city of Seattle, the three people on the nearest corner came immediately to my aid, helped me up, picked up my typewriter, even the tree-burr that I’d been carrying in my other hand, and brought me to the stairwell at the corner where I could sit and recuperate. One of them was wearing a Dark Horse lanyard. 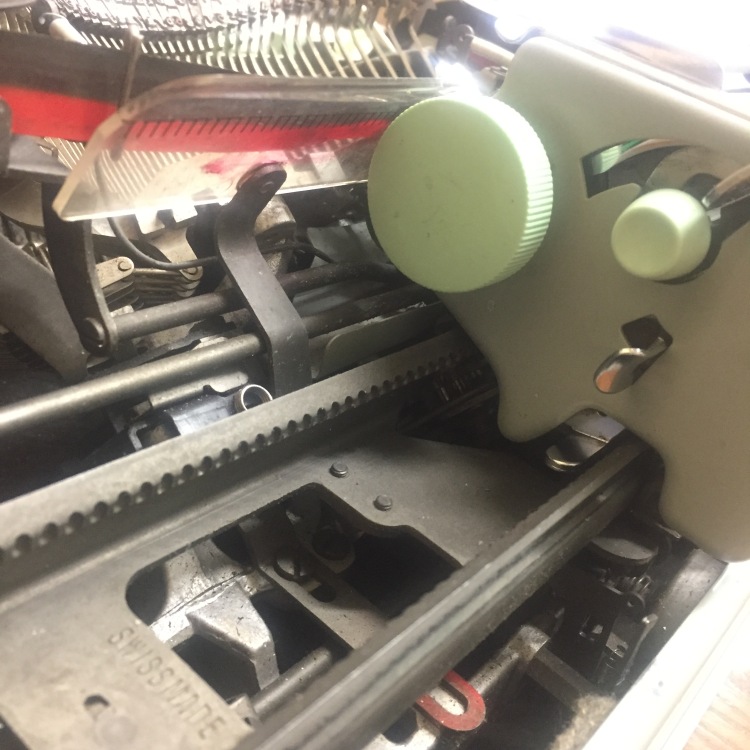 That was probably the absolute safest spot for the typewriter to take an unfortunate landing. I’m actually a little upset I didn’t manage to land cradling it, but at least also the laptop in my backpack landed safely on top of me. Tris is still in all-keys-working condition, but has taken on a minor maladjustment that I really want to address. It’s something in the alignment of the space bar mechanism (grinding a gear when moving the carriage), and somehow also the margin indicator ribbon escaped its confinement. I feel as though nursing it during this time of novel midwifery is the least I can do in thanks for all the manuscript-churning it’s done.

At least I look like I won the fight.

One thought on “Typewriter Repair”