Though their passenger insisted she didn’t require special consideration, they picked the finest pub in Dalmeera – plenty of chairs, intact windows, no fleas, full meal service. Toller looked across the table at her, indifferently curious.

Arcta Hydraia’s long green hair was braided, and she gazed through spectacles at the menu, a mess of chalk writing on the opposing wall. She murmured and nodded, then blinked and looked elsewhere as she noticed the boy’s attention on her.

“So you’re a scientist?” he asked again.

“A relatively new discipline. We’ve only really been able to explore sphere dynamics since the appearance of non-solid anomalies.” She paused. “And from there it gets complicated.”

“Why are you going to the capital?”

She drew her breath in slowly. “Sorry, classified. It’s important enough that I don’t want to look for a different ship. Not here in Dalmeera, anyway.”

A blond figure detached from the crowd to stand square in front of their booth. “What do you guys want? I’m going to fetch it from the bar.” Wendel’s short hair was in disarray, a lingering smile on her face.

“Yeah, we found a buddy headed out to join the second round of the refugee shuffle. They left, he’s going to look to his ship. Did you want anything to eat or drink?”

“How about a fried honklizard steak?”

Wendel raised her eyebrows. “Hungry boy. I’ll finish it if you don’t. What about you, Ms. Hydraia?”

“Arcta, please,” she replied, her eyes glancing at distant corners. “I’m not hungry right now, thanks.”

Wendel peered at her. “How about some hot silver?”

“You can’t leave Dalmeera without trying hot silver, no ma’am.” She patted the table. “Back in a minute. Don’t leave, don’t get in trouble.” She turned to weave through the thick crowd toward the counters. Toller shrugged across the table.

The pilot was back shortly with food. She unburdened herself of the steak and kept a mug for herself, handing the other to Arcta, who looked curiously at the iridescence in her cup. Harper took a hearty sip. “Moonlighty caffeinated nourishment. They don’t make it properly outside Dalmeera, they really don’t.” Harper watched the passenger’s tentative reaction.

“How long are we to wait here, do you think?” Arcta asked her pilot without impatience. “I trust your reasoning is good, I am just curious.”

“There are lots of people I haven’t seen here, which is good,” said Wendel, continuing to sip. “It means parts of the world are in working order. I just sense a simmer in the direction of the capital, and I’m waiting for it to die down. It’s so central a place, and also a busy time. I’m not too apprehensive to go there, that’s our next wise step fare aside. I’m aiming for a completely uneventful trip.” Harper was draining her cup quickly, almost as fast as Toller was demolishing his steak. Arcta noticed their pace and followed suit.

“It’s fair to tell you now that we’re hiding in plain sight. We’re likely surrounded by people who would aid in our capture if they knew who they were looking at. But they don’t, which helps me find the safe route.” Harper put out a hand. “I wasn’t placing you at any great risk. This town is dangerous, but also safe.”

The three finished their food and drink without much extra talk. Murmurs rose and fell, deals, meetings, uproar and upset – the place as usual.

When at the sound of a shot, chaos erupted. Wendel pulled the other two under the table, and dragging them by their shirts like ducklings, crawled along the wall below people’s legs, shielding the three of them with well aimed blows. The other two kept quiet and stayed close. They squeezed out of a door into a less crowded chamber.

Harper yelled briefly to the others. “This,” she pointed, “has nothing to do with us. Not our problem. We’re going now.” Her words were clearly enunciated. Toller and Arcta looked at each other, and both nodded tersely, agreeing that they would just like to get out. 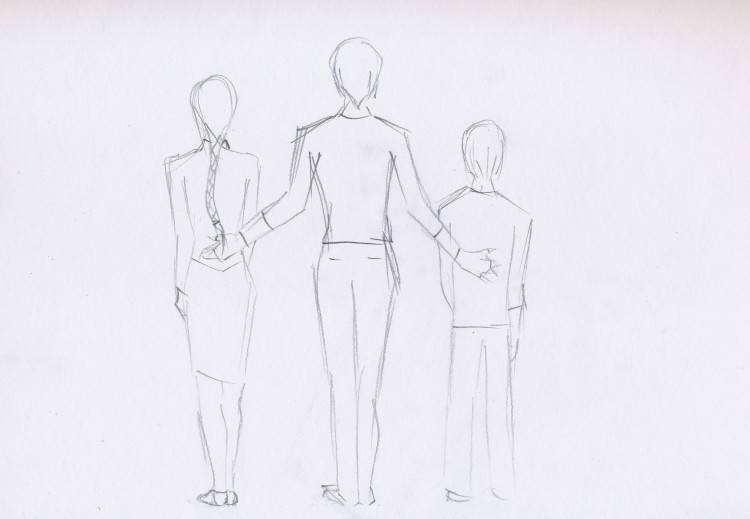 Outside the bar, the noise was surprisingly minimal. It was a localized event. Harper put a hand on their backs and walked them away briskly. “Nothing to worry about,” were her only words until they boarded the Drift 9 at the airlot.