A knot of serious-faced people held conversation near the doorway, where an obsidian and hematite mosaic spiraled out from a corner. Those rocks were the ubiquitous rubble by-product of the construction of Anzi and its suburbs. Fragrant herbs grew from the cracks amid the feet of those conversing.

A stone’s throw away, he looked up from his task of grinding powder apples to watch them. The sun shone through a quickly moving layer of overcast. He poured a heap of powder, seeds, and skins through a strainer, sifting the powder into the bowl below. He winnowed the strainer so the light, dry skins lay on top, brushing those off into a bag for tea. The seeds went into a jar, which would find its place in the shed where other full seed jars lay dormant.

He looked up in time to see the messenger lift his hand in farewell before hurrying out, probably heading to as many places as he could hit. The four or five who talked with him dispersed slowly, faces thoughtful. Cheli, in her rag-stitched skirt, met his eye and smiled, heading over. 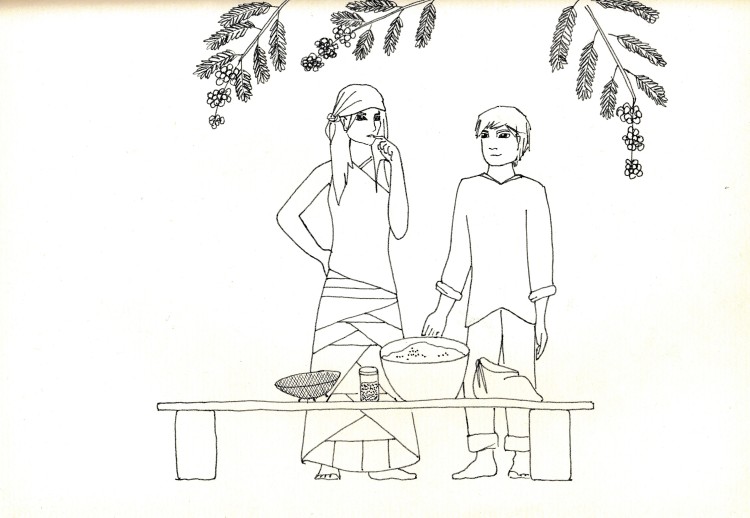 “Thanks for doing that, Toller.” She took a pinch of powder apple from the bowl and brought it to her tongue. She smacked her lips with appreciation. “Good for cereal, sauce, pudding, baking and it never goes bad.” Cheli took another dip into the bowl.

He followed suit, taking a taste of his work. The graininess sweetened and melted, with hints of dry spice. He could hear voices murmuring around the valley. “What was that about? At the door.”

Cheli crossed her arms and sighed, affecting nonchalance. “The Zendris Fault is moving. The one that runs right by this city.” He blinked. Toller wasn’t really surprised that the planetwide catastrophes had reached him. Places he once knew had been demolished by earthquake or buried in eruption, news he’d already been accepting. “No official announcements, but people are getting ready. Evacuation within the week, probably. Who knows when these things really happen. Could be tomorrow.”

“Could be.” He smiled at Cheli. If nature claimed the city before he left this garden, he could think of worse places to be buried.

“Mmm hmm.” Cheli bent to pick up the bowl of powder apple. “Want to make some pudding?”