“How are you feeling today, Your Eminence?”

“All things considered, not bad.” The old woman smiled over her glasses from behind the desk. “How are you today, Dr. Basa?”

“I am well, Your Eminence.  Thank you for asking.” 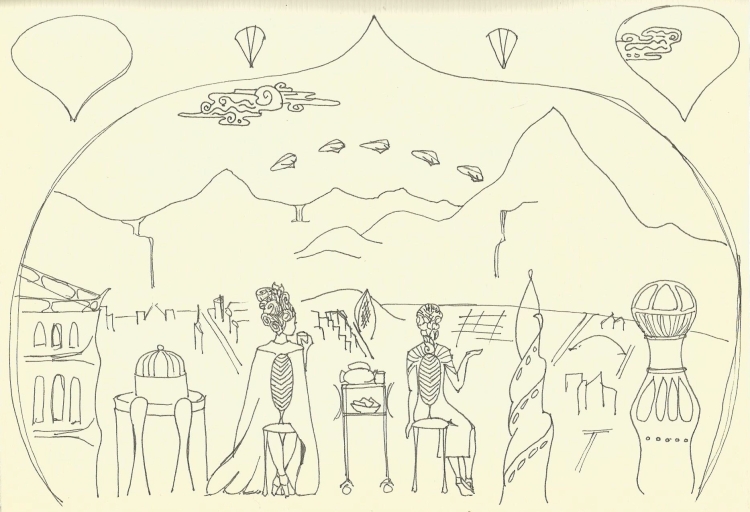 “Glad to hear it. Let’s get on with this then, I’m ready to bleed.” Her smile showed a trace of irony as she rose and walked out from behind her desk, past her bodyguards to the pair of chairs near the door. Her heeled shoes set her some inches above the doctor, for she was tall, and her grey coif only increased her stature. The legs showing beneath the yellow knee-length suit skirt were still shapely, though she walked slowly; a floor-length russet cape whispered trailing behind her, the velvet shimmering. Placing a hand on the chair arm, she sat gracefully, though not without tension. She gestured to the chair facing her, holding the doctor’s gaze with dark brown eyes.

Dr. Basa sat, placing his kit on the floor. The acting leader of the Pan-Galactic Imperium, 24th in the Magus dynasty, pulled her collar to one side. With a large metal stylus, the doctor pricked her at the crook of her neck; the inside of her right elbow; and at her left ankle. The two kept their silence during the sample analysis. The Queen turned her head to the window view: a bright, warm day with vehicles of council and court weaving about the imperial grounds. Beyond that, the towers and neighborhoods of Alisandre Capital, themselves dispersing into the contours of the mountain’s slopes.

The device beeped. The doctor read the results silently, taking the time to read them again. “It’s… much as expected, Your Eminence. The tests show your condition continues to worsen.” They shared a moment of consolation. “How is your appetite?”

“Have you felt any shortness of breath?”

“My limbs are weak. I can’t do much, and I need a lot of rest. But it’s just how things are – nothing seems to have changed from yesterday or the day before.”

“No, you wouldn’t necessarily feel it so dramatically.”

From the chair where she waited in the hallway, Soleil could hear the ruffled murmur of question and answer. Though she couldn’t make out the words, her grandmother’s tone was bemused, if impatient with the familiar protocol. Soleil hummed a tune under her breath, a village cooking fire song.

The voices grew intelligible as they drew closer to the door. “Thank you, Dr. Basa. Give my warm regards to your wife and children.”

“I will, Your Eminence. As always, it is my greatest honor to serve you and the Pan-Galactic Imperium.” Soleil stood as the door opened. “Madam Princess, good to see you.”

“Doctor, thank you for all you do for us. Be well.” They bowed, and as he left, the guards opened the door for Soleil to enter. She walked in and dropped her most formal curtsey, head bowed though smiling. “Your Eminence.”

Celeste, Magus the 24th, walked to her granddaughter and put a gentle hand under her chin. “Soleil. Rise. And give me a hug.” The girl rose, and ignoring their formal dress, they gave each other a long squeeze. “That’s more like it,” said the old woman through closed eyes.

Letting go, the Queen looked to her guards. “Leave us. But,” she said as the four filed to the door, “please send someone with refreshments. Hot tea.”

“Yes, Your Eminence.” The last in line nodded and closed the door behind him.

“Let’s sit by the window.” The two women, one old and grand, one young and fresh, walked over to the two armchairs bathed in sunlight. They sat, both arranging their finery. Celeste gazed over at her granddaughter. “Time in the countryside has done you good. Rosy cheeks, new dress, hairstyle – I love it.”

“You like the dress?” Soleil beamed, smoothing her hands over the weave bearing Inka leaves and scenes of rolling hills. “The textiles of Darye are truly impressive. This dress was made by Sujen, one of the great tailors there, during the week I stayed. It was an honor.” Soleil smiled as she gazed into the distance.

“Mm. Yes.” A pensive look crossed the face of the old Queen.

“And you, grandmaria… well?” Soleil asked pointedly, using the old family nickname. “I did worry.” She studied the elder woman, looking for any shake in her limbs, pallor to her skin.

The Queen nodded. “I am well, thank you Soleil. As well as ever I am. Certainly not as well as you. But my body is still strong, even if I need more rest than I used to. Anyone my age can say the same, I’m very fortunate to be doing as well as I am. The doctor does his tests, and they show better or worse… still, after six years of better or worse, what they say means very little to me. All I have to say is this old tower isn’t toppling any time soon.” She winked.

A knock sounded on the door. “Refreshments, for your Graces.”

“Yes, enter,” spoke Celeste. Through the door came a woman pushing a wheeled cart bearing a tea service and covered platter. The Queen gestured to the space between herself and her granddaughter. “Set it here, thank you.”

The woman pushed the cart there and uncovered the platter, revealing an assortment of light food. She filled their cups, setting everything in its place till it was arranged to her satisfaction. She bowed and left.

Soleil leaned over to inspect the offerings. Her eyes landed on small bowls filled with a mass of noodle-like shiny green tendrils. “Is this seaweed?”

Celeste took her cup of tea between her hands, inhaling the rising steam. “Yes it is dear, from Foshan.”

“Oooh.” Soleil picked a bowl and a pair of chopsticks from the cart and took a nibble. “Mmmm.” She swallowed and sighed.

“What can you tell me about Foshan?”

These pop quizzes were a tradition, and Soleil was ready. “The majority of its surface is covered by oceans, with a scattering of small, isolated islands. It was the eighth planet to join the Imperium, during the reign of Arnelle, Magus the 6th. Acquisition was peaceful, as it was inhabited only by a small number of Dragons, who had brought the planet to our attention. Today, Foshan’s islands support small human and Aquariid populations. It’s one of the four planets whose solstice falls on Pyrean Midsummer.” She brought another bite of seaweed to her mouth and chewed.

“These include cordage, nets, fluid chemicals used in the production of fuel, and,” she gestured with her chopsticks, “seaweed.”

“Very good.” Celeste sipped her tea. They watched a group of vehicles navigate to the council administration, small pods arcing in formation along an invisible airway. “You visited all the Skandarian villages by land, I hear?”

The girl nodded. “We traveled in carts pulled by oxen. A first for me, and somewhat less comfortable than a flier. Though there is a charm to it. It’s how nearly all the villagers travel, if not by foot.”

“How were the roads?”

Soleil’s eyebrows twitched up at the question. “Roads… were more like cart trails.” A small laugh escaped. “Occasionally they were paved, but then you would almost wish they weren’t. I don’t think they have any way to maintain pavement – the dirt road sections were actually somewhat smoother. It was long hours traveling, grandmaria. Except when local riders would accompany us. They have loud voices, and good stories. They like to sing.”

“Well, I’m glad they kept you entertained.” Picking chopsticks from the cart, the Queen took a dumpling off its plate. “Tell me what you saw in the towns.”

“We made a loop, Arkahn to Starhn to Darius to Darye. There aren’t a lot of people left in Arkahn and Starhn, at least it seemed that way to me. Maybe everyone was in the hills with their flocks? What I saw was rather desolate. In Darius the fiber harvests have been poor, and they say the past two years have brought unhappy weather. They can’t produce much, and families there have been on meager rations. But spirits are still high, and they asked but didn’t beg for food assistance. Darye is prosperous with the textile trade – it’s actually a fairly sizable town, which makes me think maybe that’s where the young people of Arkahn and Starhn have gone.” They continued their talk until the sun began to set.