From her perspective in darkness, the occasional sound reached her ears. Chrysanthe was thinking of her pillow and blanket forts – the way everything became dark and hot, smelling of her own breath, and she listened to her father in the house. She couldn’t hear much more, so she stayed in that cozy place.

Her dad hadn’t said anything since she’d last slept, but he was nearby. When she reached for him, he played with her hand a little. The occasional squeeze was enough to reassure her, since she didn’t know if he couldn’t speak, or she just couldn’t hear him.

People approached, talking. Just the rise and fall of their voices, through many layers. She jiggled his hand and he wiggled back.

“We’ve sent so many nurses to other planets. Thank you for volunteering.”

“This seemed an appropriate time to step back in. Yet, I’ve never done triage. What am I looking for?”

“This is our first sweep. We’re reaction testing. This device measures muscular nerve response and blood flow to extremities. There’s a threshold.” She showed the readout to the volunteer. “During high rush, patients below that will have lowest priority as instructed. I’ll show you.” She gestured to the man holding his daughter’s hand. “He’s awake, we’ll start with him.” She cradled his other hand in hers and he flexed it. He did the same for Chrysanthe on the other side. The voices were louder going wah wahh wahhh.

The nurse put the holding device in his hand and wrapped his fingers around it, squeezing them. She released and cradled it for a moment until the device light turned color. She checked it, and glanced at the other patients around the room before showing it to the volunteer aide. “This is a significant reading, below threshold by a margin. Input the command here, and his bracelet will carry the tag. And that’s it.”

The aide nodded. “I’ll watch while you check the next patient over here.”

King Ascendant Grant Vario raised the mask to his face and activated it. The hairs on his arm lifted as the ion barrier activated around him, effecting a blue glow. He nodded to the Dragon Councillor, and they exited the transport onto the grounds of Eldea Hospital, accompanied by a security escort.

The quarantine guards opened the door for them. Inside, the halls were filled with people reacting to their symptoms, rubbing their faces and blinking. Back when the sickness appeared on the planet Hirylien, there had been no knowledgeable measures. By the time they recognized the epidemic, the majority of the planet had been infected. The symptoms had been difficult to distinguish until they were too serious for recovery. This time, they’d recognized it almost immediately.

From the room she shared with her father and two other patients, Chrysanthe watched the hallway. The retinue walked past, and she saw the second dragon she’d ever seen in her life. Arkuda’s scaly form gleamed next to the King Ascendant’s grave face, and they passed in a quick moment before she could mention it. She wasn’t sure if her sight had already gotten fuzzy, like they told her it would, or if they were really glowing. She turned her head and succumbed to drowsiness, closing her eyes on the sight of her sleeping father.

They met with the head of the hospital, who debriefed them on the patient population. Those furthest along were beginning to lose their eyesight to nerve degeneration. Vario took this in, but refrained comment.

They passed through layers of security till Arkuda and the King Ascendant were outside Sturlusson’s room. The guard coded them in.

Inside, the quarantine prisoner sat shirtless in the bedside chair. Hospital equipment had all been moved to the corner. At the sight of visitors, he rose to his feet. “I am honored. The King Ascendant, and his dragon.” Arkuda gazed at him in silence.

Vario faced him squarely, hands behind his back. “You declined treatment, even though you tested positive for HA235.”

“So is this, then, your farewell note to the Imperium?”

Framed by his dark hair, a smile crossed his face. “No.” He locked gaze on the King Ascendant as he sat down again.

Arkuda eyed Raev Sturlusson sidelong. Over the man’s collection of tattoos, he glimpsed disruption patterns. Residue of communication with others. The dragon studied him intently.

Vario clasped his hands tightly. “We have reports now of cases on Ionos and Lurin. How many more outbreaks are we to expect?”

“How many more do you need in order to put an end to them?” Arkuda watched his surrounding disruption evaporate.

The King Ascendant drew himself up. “We are now enacting the same quarantines that we did on your home planet. You were lucky to have survived.”

“I really was.” The communicative traces reappeared as Sturlusson joined together different faces of his fingers. He looked at them through half-closed eyes. Arkuda stirred the air toward the prisoner with his breath, observing the patterns react.

King Ascendant Vario made a prompt and wordless exit. Sturlusson angled his hand sign to the dragon Councillor, who curled his lip before exiting in turn.

A twenty-one person assembly waited atop the Verdant Plateau – one dragon, four Aquarii, and sixteen humans arrayed above, inside, and around the Pergola. The procession halted at the plateau’s edge, and alone the ruling family disembarked to join them.

“This is the big show, Chrysanthe. The Vision. You were a baby last time you saw this.” The young girl, still just small enough to ride atop her father’s shoulders, squished his cheeks between her palms. They had a distant view from amid the sea of people filling the valley south of the Plateau. He kept her hands off his face by holding them. “Of course, it’s never the same twice. But I remember you smiling.”

“I doubt I could really see it if I was just a baby.”

“Maybe so. It’s good luck for you to be born so near Pyrean Midsummer. Now that you’re seven you get to see why.”

The Queen’s voice rolled out over the surrounding valleys, transmitted into space beyond. “Now with all the peoples of the Imperium, we light the sky with the Pyrean Vision.” The Magus family turned to face the great Pergola, and together sat on their knees.

“A show of respect for the hopes and dreams we express in the Vision.”

The four Aquarii in their respective corners of the Pergola began to shimmer warmly. The four humans surrounding each Aquari raised their palms, and the light around the Aquarii grew. A deep, melodic thrumming pervaded the air as their spheres of light widened to intermingle, beaming through the open Pergola.

“See how the Aquarii channel the human representatives, mixing them all in one Rasakarya.”

“How come those people get to do it?”

Chrysanthe’s father took a deep breath, and laughed. “This event is unique, ‘Santhe. Them up there are the ones that start it, but actually we all get to take part.” At no response but silence, he checked to see his daughter’s face transfixed by the spectacle. 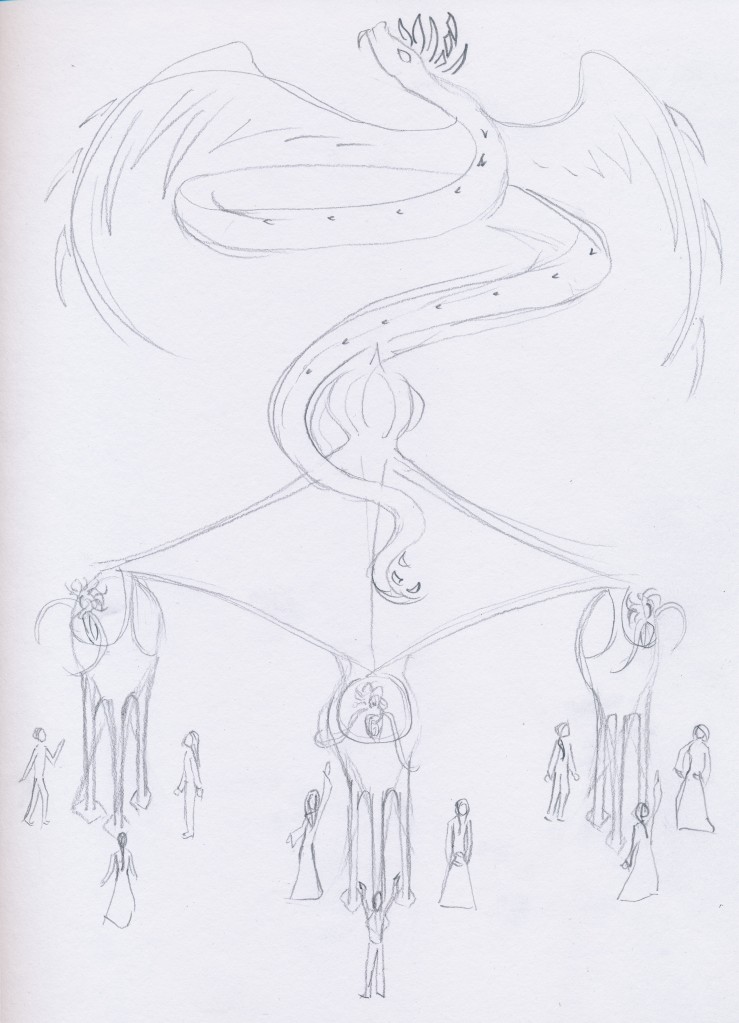 Aural melodies began to wail, soar and syncopate. Intricate brightness enveloped the entire Pergola, reaching the coiled body of the dragon perched in massive flying form on the roof. Its silver-blue scales flashed as it took to the air, gently spiraling to float high above.

The mass of light gained focus, a streaming latticework that converged on a pulsing point centered above the structure. “It’s all joined now, see, and they’re making sense of it.” Glowing geometry transformed through a series of iterations that became more concise and graceful. The central point grew brighter till it burst upward, illuminating the sky all the way to the dragon above.

“What dragon is that?”

“Let’s see, that’s not Arkuda…” He pulled the event program from his pocket. “That’s Arctyri, of Foshan. Saga, Kyridi, and Rhizoa are on the other three planets this Midsummer.” The young girl repeated the names quietly.

The light revealed the dragon’s greater spectral being, extending through the sky in whorls and spikes. Arctyri’s body navigated a toroidal pattern, bending and channeling the light in this shape. The color of the sky began to change.

“Now the dragons are uniting the Visions from across the universe, from four planets in four separate galaxies who share the same moment of summer solstice every seven years. Right now!”

“You’ll see. You’ll know!” Chrysanthe held her father’s hands and craned her head to watch. The sun was setting to her left. Between the growing night and fading day, the sky did resemble a conduit reaching through the universe; though instead of being dark, it was varicolor luminescent. She untangled a hand to reach up to it.

The combined light of four sunsets filled the air overhead, breathed in by the motion of the dragons’ flight. The colors gained substance and weight, falling like mist until they reached upraised hands.

It wasn’t like rain or snow, but Chrysanthe felt it, an electric sparkle that raised the hairs on her skin. It reminded her of things: warm cereal in the morning, dancing to the music her parents played. She saw the colors respond around her hand, and she did know just what to do after all.

She tilted her head as the lines and figures issuing from her father’s hand rose to meet her own small pictures. The expressions were abstracted, but when they joined, it somehow made a little more sense. Chrysanthe turned to see it happening everywhere around her. The sunsets’ light was fading, and the grand picture grew brighter in turn. She could see lines now that didn’t come from around her, but from somewhere across the galaxies, and they too connect into the picture with meaning. It seemed miles wide.

Arctyri above released the energy from the glowing torus, sending it back to the central focus. As a point of static harmony was reached, the Aquarii sent the energy crackling back through the pattern, rays of light connecting disparate lines.

When the big egg came falling through the vision like a springtime surprise, Chrysanthe wondered what amazing thing would come from inside.